President Biden shuffled, literally, to the Middle East this week passing gas, money, and lies in an effort to appear like the leader of the free world.

With his first stop in Israel Biden stumbles a bit but keeps his feet shuffling along with the swagger of an ancient aging beast representing the USA. The Israelis pushed their agenda of war with Iran as far as they could and said nothing of their murder of Shireen Abu Akleh, whom Biden called Shireen Abu Al-Qaeda.

Recently the foolish Palestinians handed the bullet that killed Akleh to the USA specifically demanding Israel does not get its’ hands on it. The USA instantly handed it to the Israeli military who, from our unnamed sources, destroyed the rifling that would have identified the soldier and rifle that killed her. So those authorities claimed it was not possible to identify the perpetrator and made the claim that it was an accident, an opps moment.

To appease the Palestinians Biden offered $100 million for hospitals, which after the $75 Billion so far given to Ukraine to destroy Russia is a joke. The Palestinians begged Biden to reopen the US embassy in Jerusalem but were ignored.

Later Biden and Israeli authorities made a joint declaration that they would destroy Iran to make sure it did not create a nuclear weapon, leaving Israel as the only nuclear power in the region.

As Biden slowly shuffled off the plane in Saudi Arabia he was seen fist bumping the smiling murderer, crown princess Mojo Bin Salmon, and according to Biden, privately, out of anyone’s sight or earshot, claims he brought up the murder of Kashoggi, who MBS made into Halal Sausage for a barbecue several years earlier. 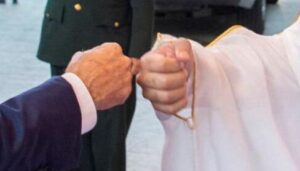 Biden basically was on his knees begging the Saudis to forget about his insane statements about MBS and pump more oil to save the USA, who is supposedly self sufficient in oil. The Saudis smirked and laughed and realized that the USA was no better than the beggars in the local markets.

What did the USA win here?

Biden walked away with many small concessions for Israel, I guess his main employers right now, and nothing for America. He actually thought he could say that an increase in August oil production was something he got, but it had been effected in the last OPEC meeting. But not to be outdone the USA’s passion for press freedom was met equally from Saudi Arabia as there is little difference between Kashoggi criticisim of the crowned prince and the US/UK torture and imprisonment of Julian Assange for exposing UK and USA war crimes.

In the meantime, back in the apartheid state

As soon as Biden left Israel they bombed the largest open air prison camp in the world as a response to their intransigent meeting with Biden. The Israelis were careful to bomb out areas they had no intention of building settlements on.

wpDiscuz
0
0
Would love your thoughts, please comment.x
()
x
| Reply
Share this ArticleLike this article? Email it to a friend!
Email sent!