Turkey Takes A Turn To The Darkside

Turkey certainly has a long and spotty history. Filled with the kind of intrigue and subterfuge that the ancient kingdoms were all about. Since all migration to Europe is funneled through Turkey it has found itself in a position where it can manipulate the spineless leadership in Europe and has, in effect, blackmailed them.

Last year saw Turkey dump 2 million migrants into Europe. Flooding over the open gates into Greece and heading up to Germany at the request and invitation of Angela Merkel. It should be noted it was not the Germans inviting these hordes; it was a single person Angela Merkel. We call her Mama Merkel. Perhaps she was naïve and had no idea how large this migration would be but then again she was an elected vetted head of a semi-national (Germany is under EU law now) state.

Starting a war against the ethnic Kurds, who do not see the government in Ankara as supporting them at all, Erdogan has killed over 4000 of them, including woman and children. Burning buildings, and destroying cities inside its’ own borders. Since the Kurds have historically lived in a territory that spans from the Eastern Turkey through Syria and some of Iraq there comes some more complications. Erdogan claims all Kurds, no matter what group or “union” they belong to are terrorists he invaded Syria and Iraq with his troops, bombed whomever it chose to, and basically gave the finger to those nations when they complained. He has hidden behind the skirts of NATO, safe in the knowledge that if anyone actually attacked them they would find NATO (the USA) standing there to protect them. This is certainly sweet proving ground for a dictator who holds many cards others want.

The USA wants those bases in Turkey so it can supply its’ “moderate rebels” to overthrow the Syrian government for Saudi Arabia and to try and save face over Iraq as Islamic State takes more and more land and money from them. The USA also needs those bases to keep missiles pointed at Russia and Iran. It does this even while both Russia and Iran ask the USA to join and help fight the terrorists. Instead the USA helps Erdogan and funds the “moderate rebels” in the hopes they can secure the oil fields for the French, American, and UK governments. 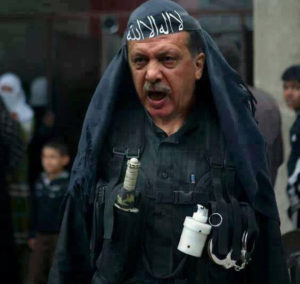 All the while Erdogan is murdering more Kurds in the Eastern part of Turkey and jailing any journalists who dare to expose him and his corruptions. Erdogan has been shown to be the major pipeline of money for terrorist oil and antiquities stolen from Syria and Iraq. Erdogan even went so far as to change their “constitution” to strip opposition leaders in their parliament of their immunity making it easier to jail any opposition. Most of Erdogan’s original advisors have quit and he has surrounded himself with the most unsavory characters as replacements.

If you compared the actions of Qaddafi and those of Erdogan, well, Qaddafi seems an angel. Erdogan has killed more, funded more terrorism, aided in transport and sale of stolen weapons, assets of other nations and jailed almost every major opposition leader, journalist, closed all opposition news papers, arrested all opposition editors, and even closed TV stations who were reporting unfavorable news. No one is allowed to speak a word in opposition to him. Not content with that Erdogan takes his iron fisted fascism outside his borders demanding comedians go to jail for making jokes of him. He made himself the joke but Merkel, the German leader, allowed it. Just as she allowed a 6 billion dollar blackmail demand to be paid to Erdogan too.

Erdogan is the closest our generations can get to a Hitler like leader. He is a danger to the world and even more so the USA. As a NATO member if his antics get him attacked we would have to defend him. And for what? The bases, the bases to make war on other nations. We need them, but the costs are getting too high and backing a maniacal dictator must end.